SHADOWS IN THE VOID 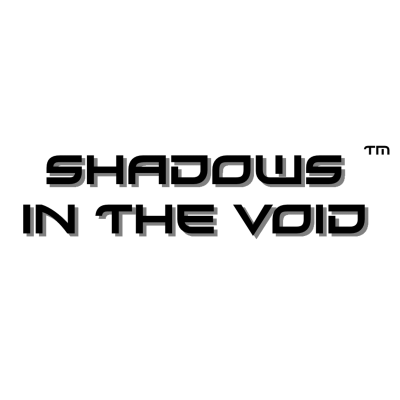 Shadows in the Void miniatures miniatures range is run by Strato Minis Studio and you can buy them (in really nice prices!) from their online store.

Digital version can be downloaded for free from Wargame Vault

or you can buy Shadows in the Void rulebook from the author until stocks last (ask at ORDERS@ASSAULTPUBLISHING.COM)

In times when nearly all new wargames have to be “simple” or “fast-paced”, and “easy to learn, hard to master” is little more than a worn-out slogan, we dared to go against the tide. If I had to describe Shadows in the Void in a single word, it would be “nontrivial”. 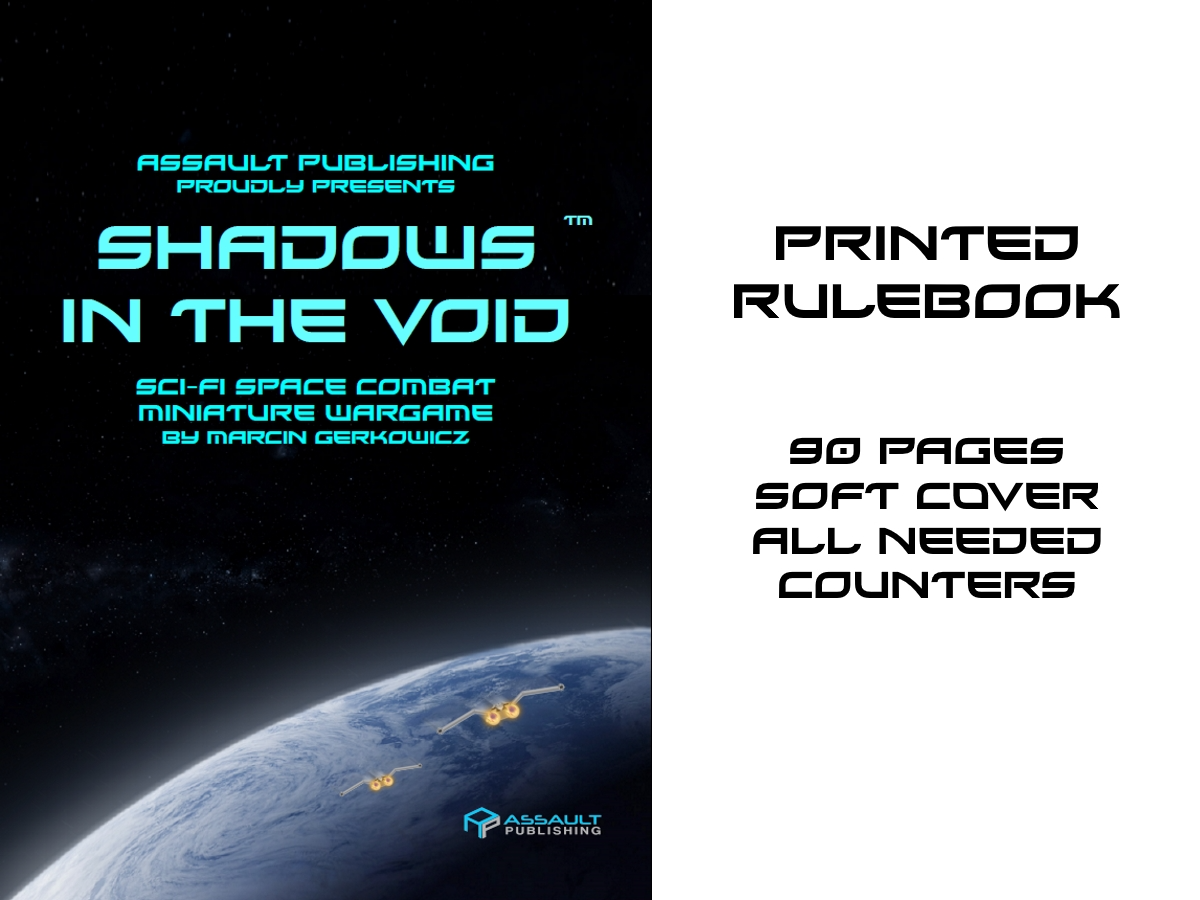 Shadows in the Void is a unique spacefighter combat miniature wargame based on highly modified core rules of Hind Commander (mainly simplified and streamlined) and inspired by classic ancient Chinese military treatise The Art of War. Unlike most games within the genre, Shadows in the Void focuses on stealth, electronic warfare, and the interactions between spacecraft in your squadron. It certainly is not a “Red Baron in space” ruleset – you won’t see many dogfights during the battles. Why would advanced war machines of the far future use tactics which became obsolete in mid-20th century? Of course, they look very appealing on screen, but not necessarily on the gaming table. 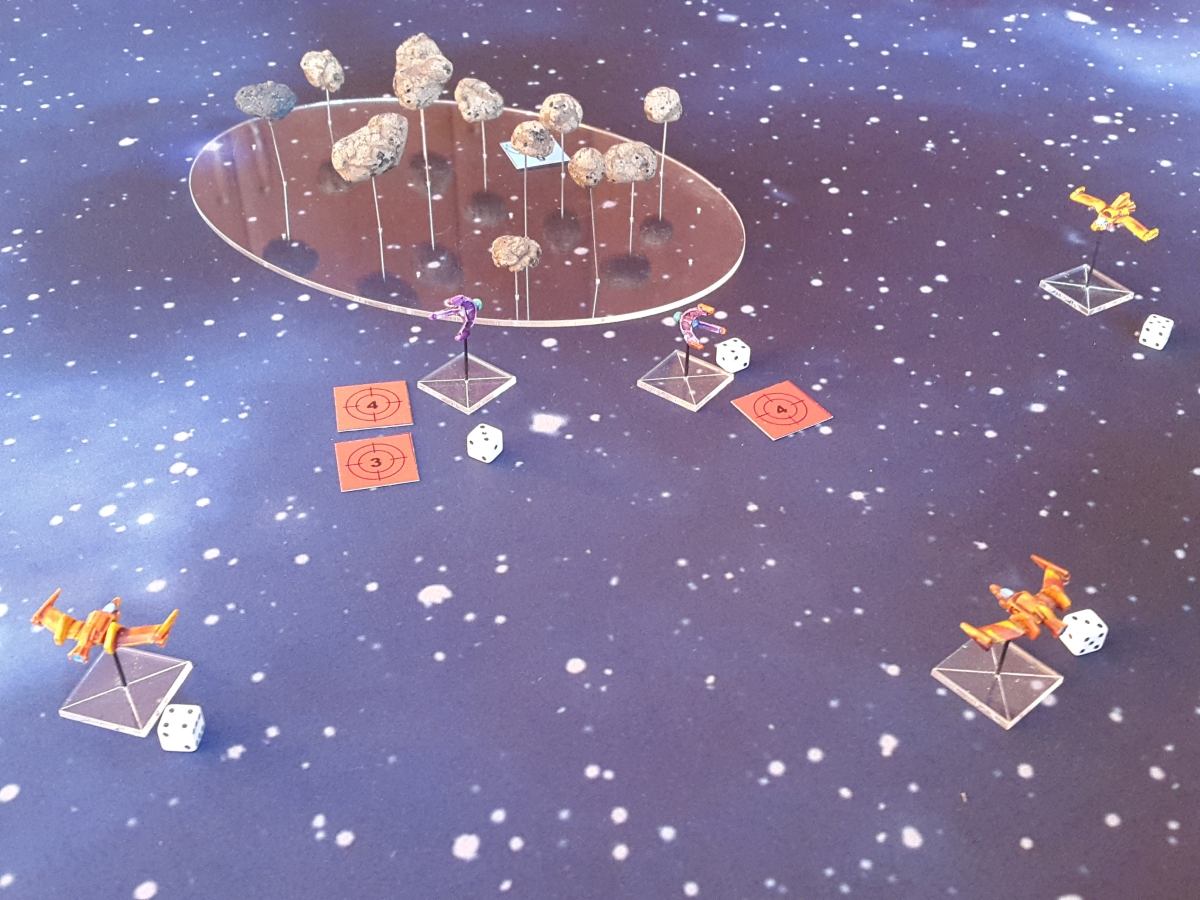 Instead, combat in Shadows in the Void takes place over extremely long distances and at huge speeds. Often, detecting the targets and locking your weapons on them is the most important aspect of the game – exactly like in Hind Commander. The average 100 x 100 cm game table covers about 2.400.000.000 square kilometres of deep space. Furthermore, the rules model a 3d environment by adopting the best practices of aerial wargames. In this case, the distances are a little shorter, because we consider that atmosphere and gravity significantly affect top speeds and weapon ranges. The ruleset covers missions both in deep space and above planetary surface.

Although the games core rules are based on Hind Commander, we put a lot of effort to avoid making Shadows in the Void “helicopters in space”. Numerous rules were redesigned or written from scratch to better fit the theme of the game, as we wanted to make it more dynamic and engaging.

In the 90-page rulebook you will find:

One of the most important aspects of the game is the lock-on system. Before you launch a missile at an enemy craft, you have to lock your weapon on it – but you have to do this before the movement phase, which gives your opponent a chance to react. As the hits can be really deadly (weapons are for killing!), this introduces a risk management aspect.
In most of cases, the spacecraft carry fairly limited amounts of ammunition, which means that you will have to choose your targets wisely, especially during bigger games. In the heat of battle, there is little margin for errors, which have serious consequences – unless Lady Luck is on your side.
Additionally, you cannot count on hit points to save your units from the incompetence of your commanders! Shadows in the Void uses the damage system from Hind Commander, which means that every successful hit which penetrates armour/shields will damage something and reduce the craft’s combat capabilities. A single lucky hit can eliminate even the most powerful ship.

The game takes place on the fringes of known space, where many alien races fight for resources, influence and survival. The book includes rules for 5 basic factions, each with a completely different doctrine and playing style, as well as its own miniature line.

Confederated Outer Colonies are an uneasy alliance of human worlds. Confederate squadrons consist of standard, balanced and beginner-friendly spacecraft with a slightly retro-style appearance. They are also well armed, with a wide selection of various loadouts. Although Confederate weapons are rather crude and inaccurate, their brutal power cannot be ignored. On the other hand, unit parameters are not too impressive, especially when it comes to speed. 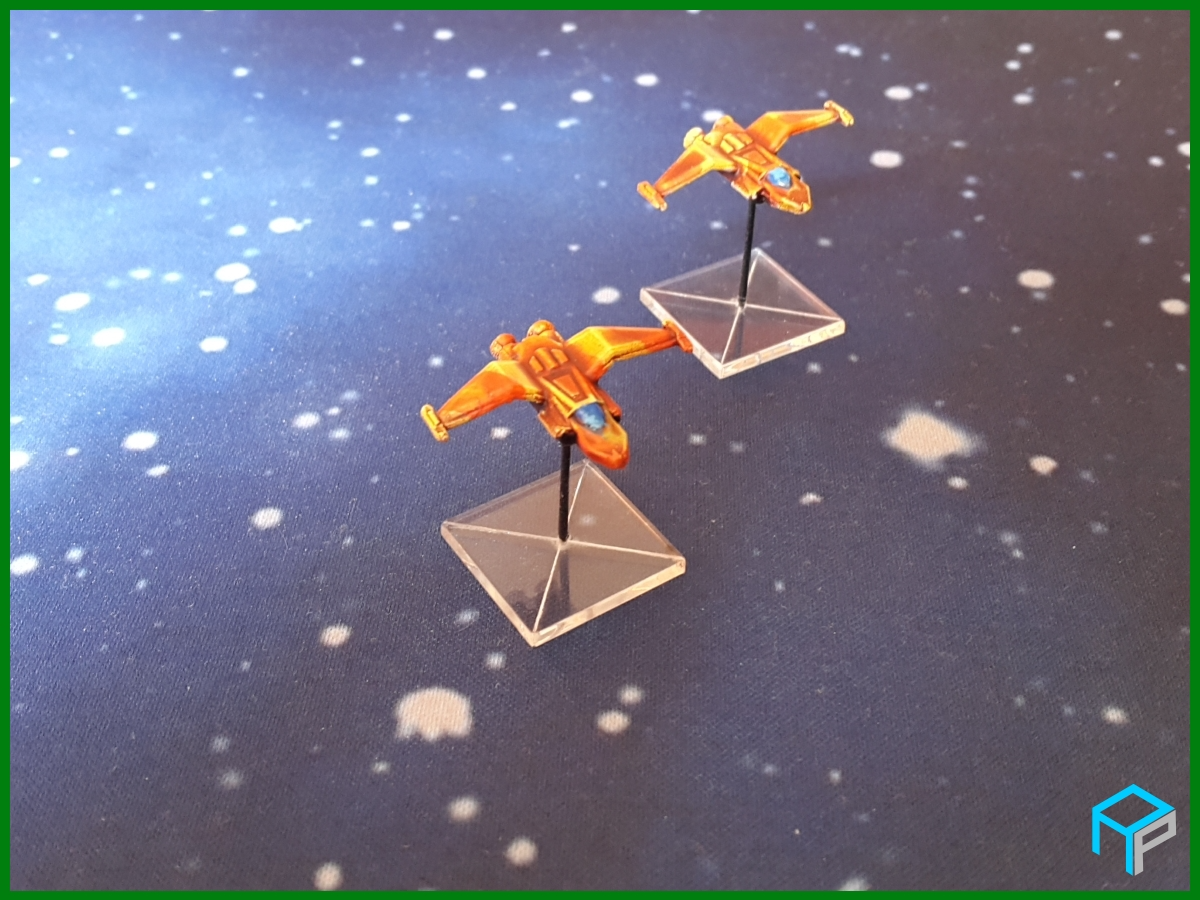 Twisted, insect-like creatures which are obsessed with the number three. Their craft are stealthy and extremely fast, but very fragile. Their weapons characterised by high accuracy, short range and low ammunition supplies. To give you additional tactical options, the Esh-Aven can use their psychic powers in combat. All these features make them perfect for hit-and-run attacks. 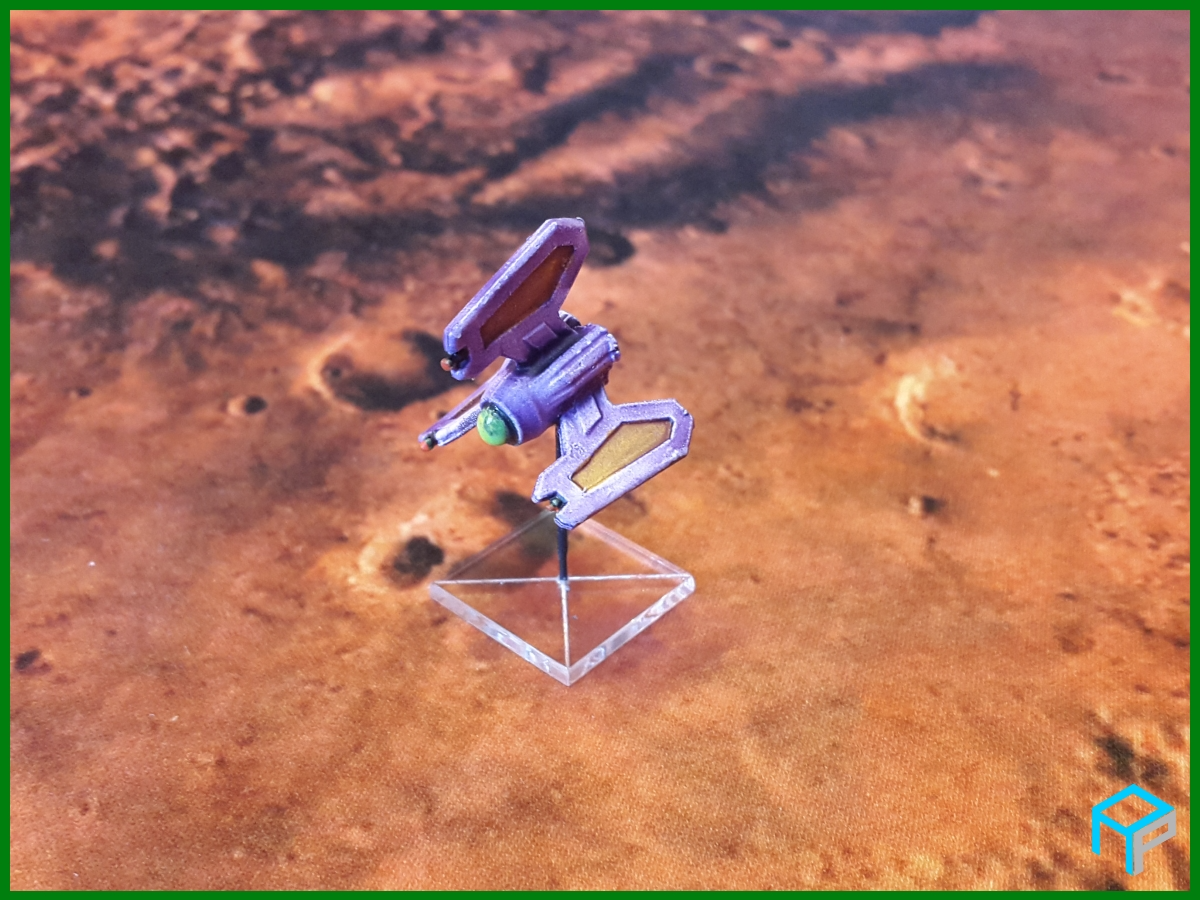 Enhanced through genetic engineering, nanotechnology, cybernetics and similar technologies, the Post-humans desire to bring perfection to the universe. They are either perfect beings or inhuman, arrogant SOBs – depending on which side of the blaster barrel you are. Terran fighters are compact and advanced, and rely on effective shields and self-repair, instead of manoeuvrability. Their arsenal consists of many types of deadly missiles, but lacks any cannons whatsoever. TPE doctrine is based on command fighters marking targets for attack craft. 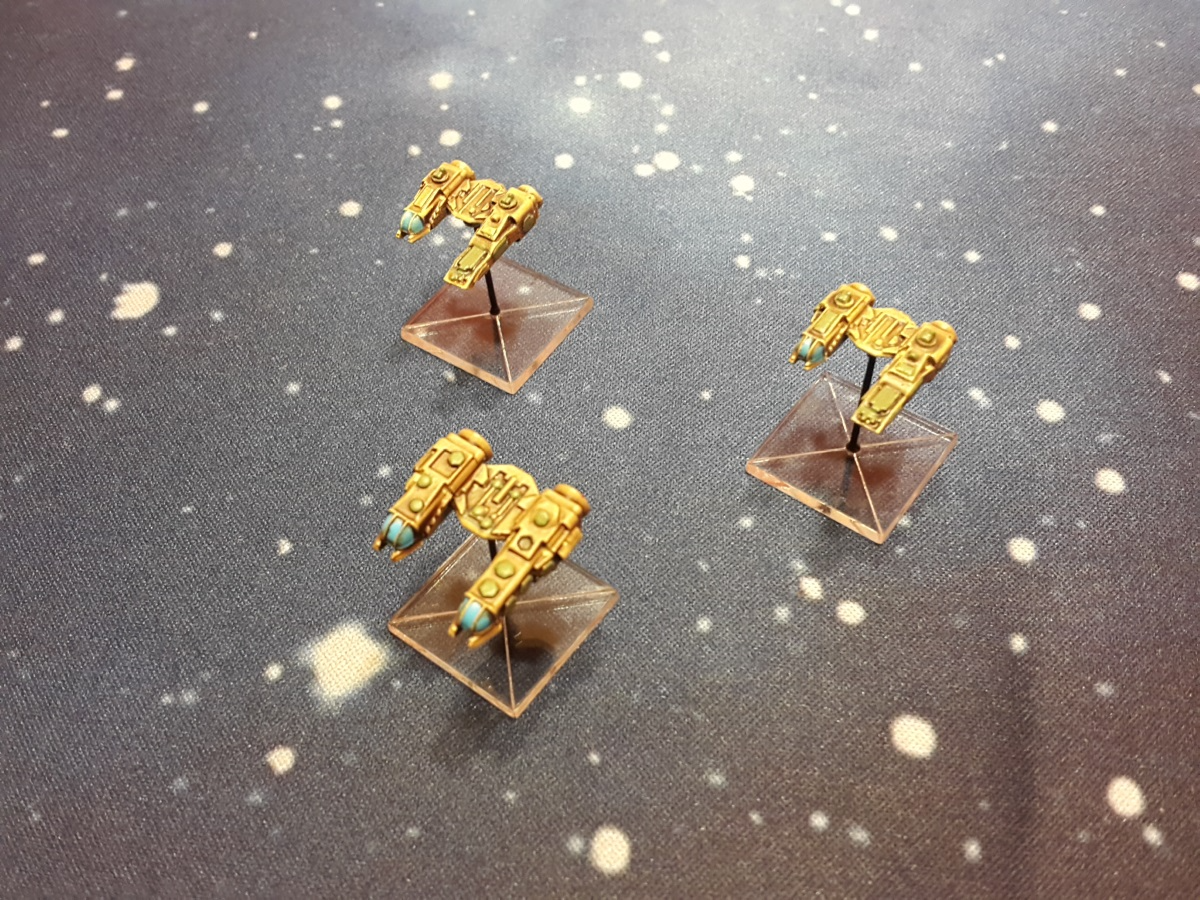 The Daeheen are the remains of an ancient, dying civilisation, employing the most advanced technology of all five races. In combat, they rely on drones, which swarm around bigger motherships, significantly increasing their combat capabilities.

Masters of biotechnology, the Hyvearn developed their civilisation by mutating their own brethren into living machines for specific duties within their society. They do not use living spacecraft – they ARE the spacecraft. In battle, the Hyvearn use less intelligent slave ships commanded by support craft.

The miniature scale of choice is 3mm, and the Shadows in the Void range is designed to be compatible with Odział Ósmy PSF 1/600 sci-fi range.