Some time ago my friend told me that sci-fi wargame must have the Bugs. In PMC 2640 they had only small selection of units, dedicated as OpFor for solitaire mode, but in PMC 2670 Space Bugs (or simply Bugs) are complete army list. From the game designer point of view, Bugs are heavy task - how to do them interesting from the tactical point of view. Of course Bugs are the moving wall of claws and spikes, but the most important was to make the interesting wall of claws and spikes...

In this post I included a short review of Swarm army for incoming PMC 2670.

The Swarm army has less rigid composition comparing to other armies allowing them to field more low-tier units. Within the army there are a following lines: Lesser Bugs, Underground Bugs, Spore Bugs, Flying Bugs, Pioneer Bugs, Leader Bugs and finally Infected Humans. The Swarm always has to include one and only one Leader Bugs unit of Tier equal or higher to Battle Tier.

Lesser Bugs, Spore Bugs and Leader Bugs has the units from Tier I to Tier V, while the other lines starts from higher  The unit lines always finish on Tier V, with exception of Infected Humans, who are represented by a single unit entry on Tier III. 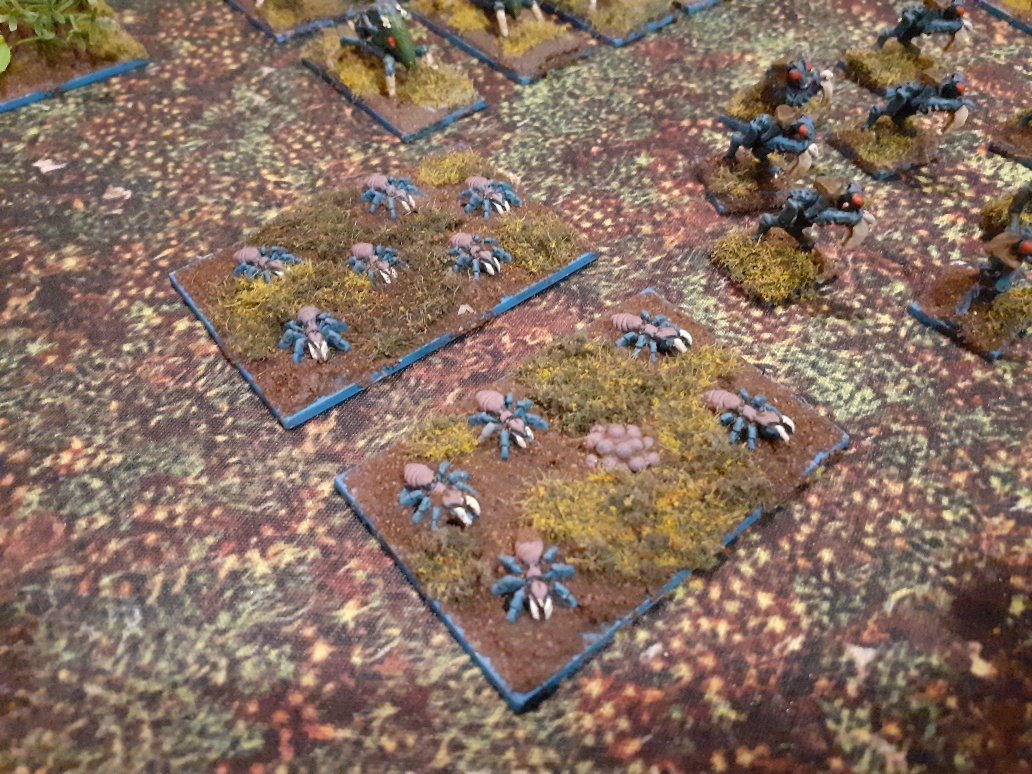 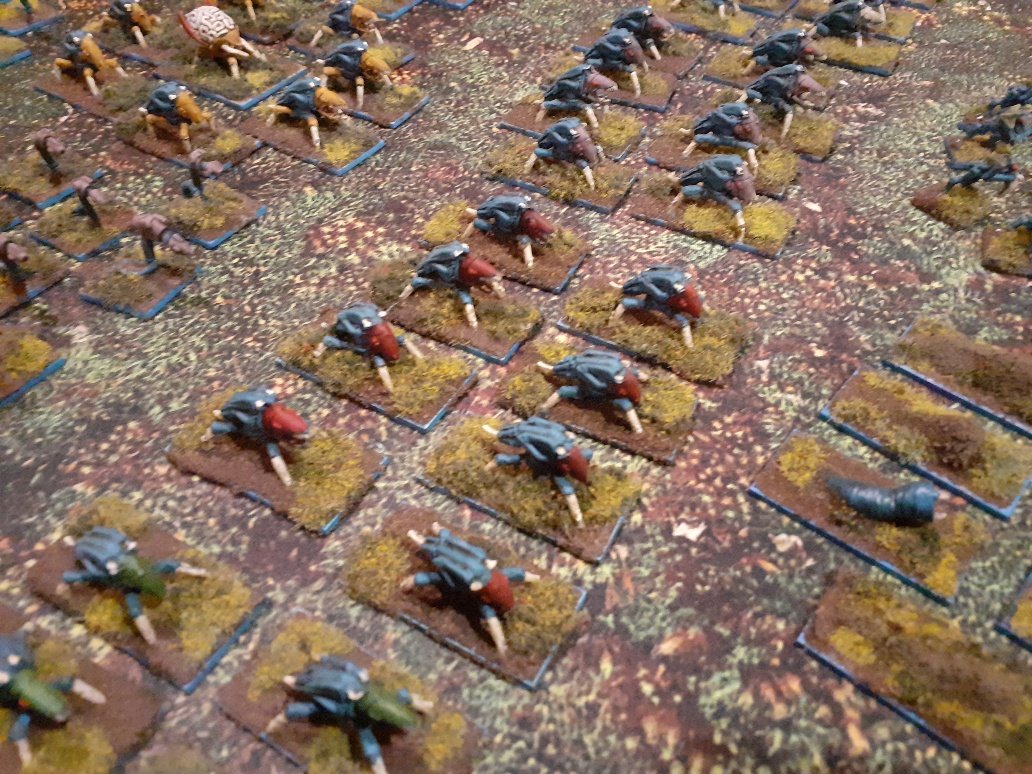 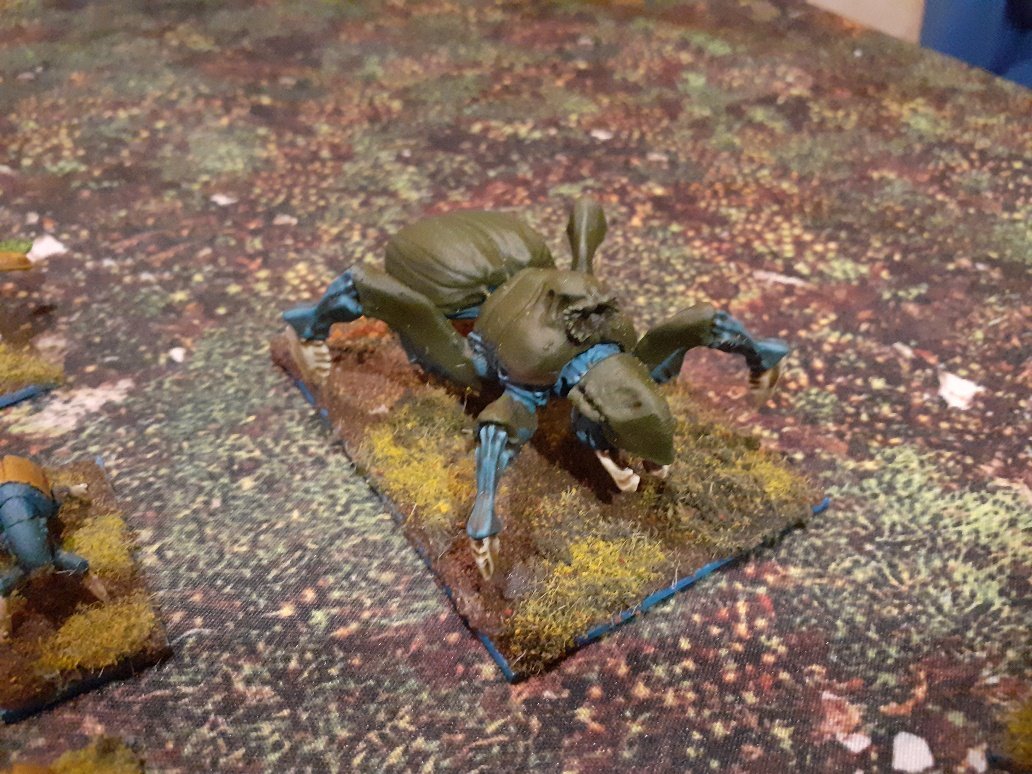 All units on Tier I are respresented by a single swarm of tiny bugs (or alternatively 4-bug-strong unit), Units on Tiers II-IV always have 8 models and Tier V is reserved for single-models oversided Bugs (counted as vehicle with a small modifications).

Most of the infantry units has Animalistic behaviour special rule and all have Determined rule, which make them very resistant to psychology, but on another side they suffer very heavy losses under fire and are too stupid to use cover effectively. 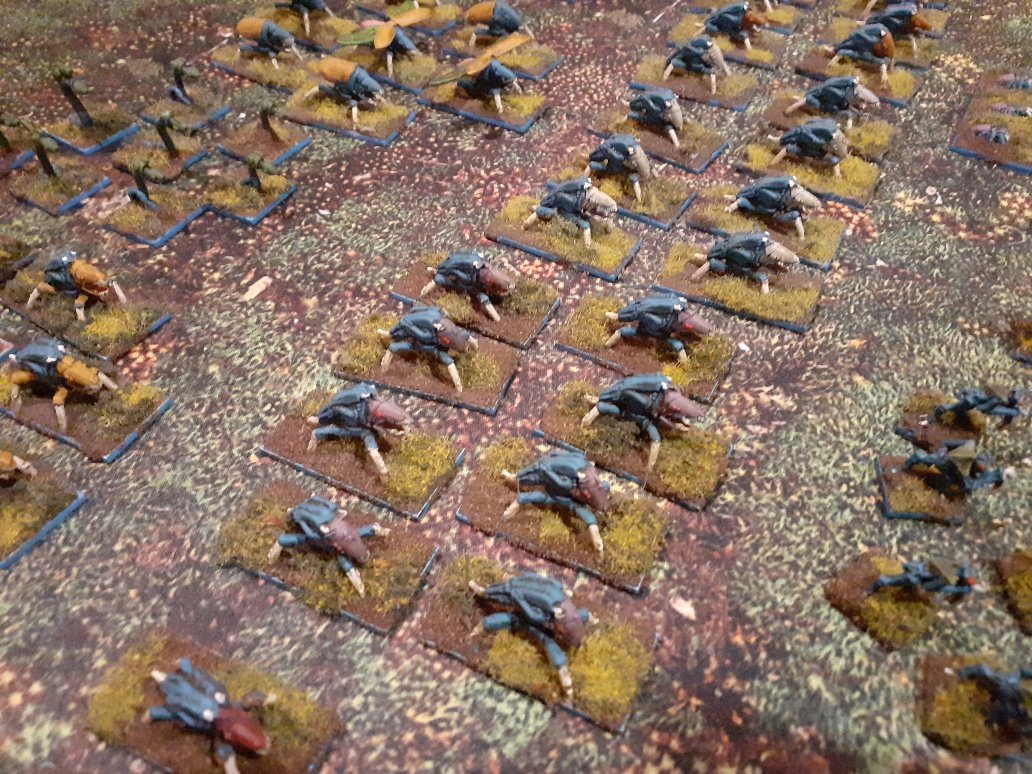 Lesser Bugs are basic close-combat unit of the Swarm. They do not live long under fire, but they are very fast and deadly in assaults. In addition they have Agressive special rule, which forces them to assault if it's only possible. What's more they are able to replace the casualties during the battle, as new bugs come from underground or form another hideout in place of the fallen ones. The line ends with huge Fire Beetle in Starship troopers-style. 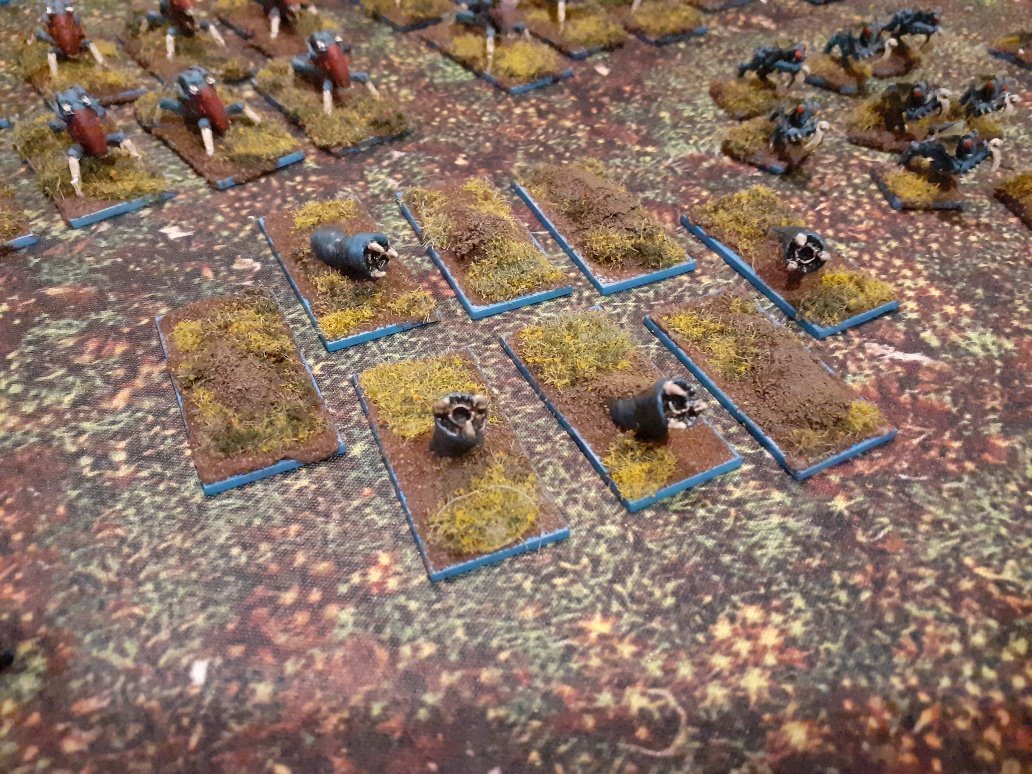 Underground bugs are more resistant variant, but slower comparing to the Lesser Bugs. The line starts on Tier III and ends with Sandworm on Tier V. Any Kwisatz Haderach here? 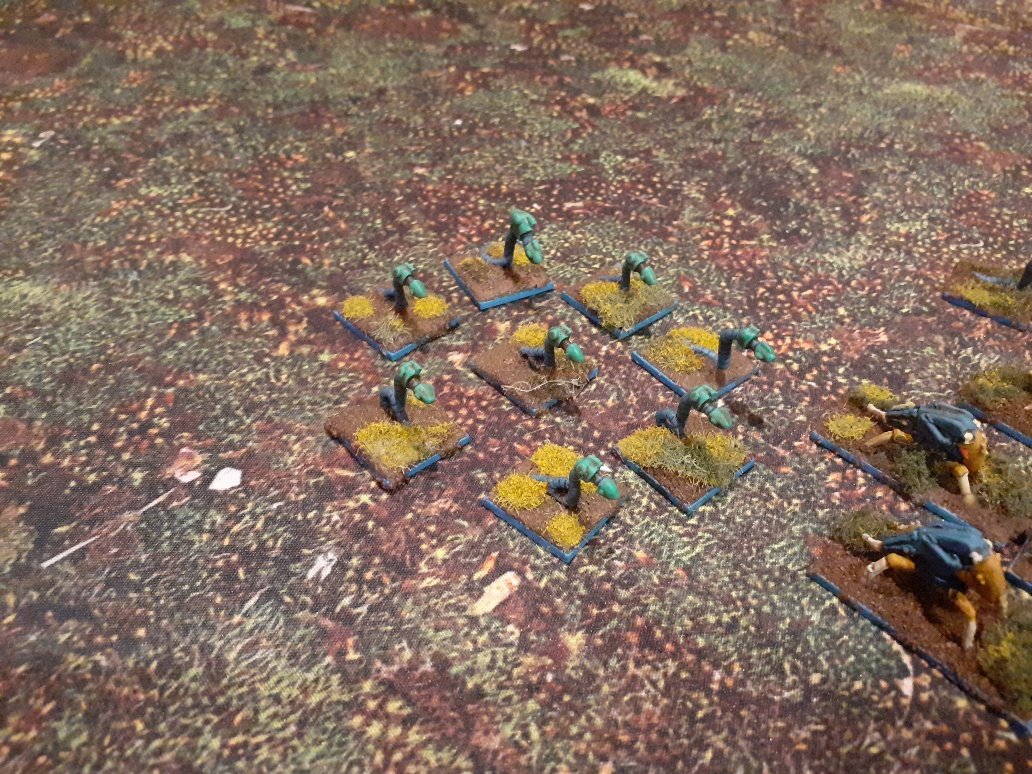 Spore bugs are the main range combat forms in the Swarm army. Like Lesser Bugs they can replace the losses and Tier IV they have anti-aircraft rule. The line ends with Bio-plasma thrower, which acts as heavy artillery. This line starts from Tier 1. 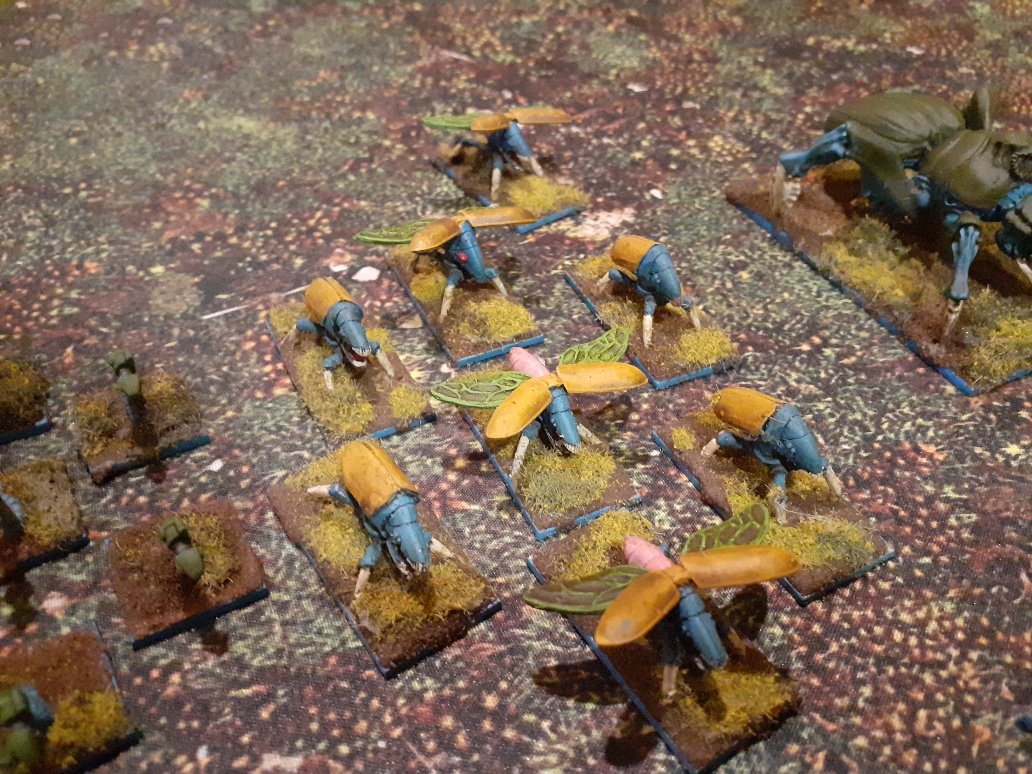 Flying bugs are really fast, but relative fragile, which forces to use them smart. They starts from Tier III and end the Carrier Bug - a huge transport unit. The Flying infantry rule allows them to move over the impassable terrain and assault all types of units, including aircraft. 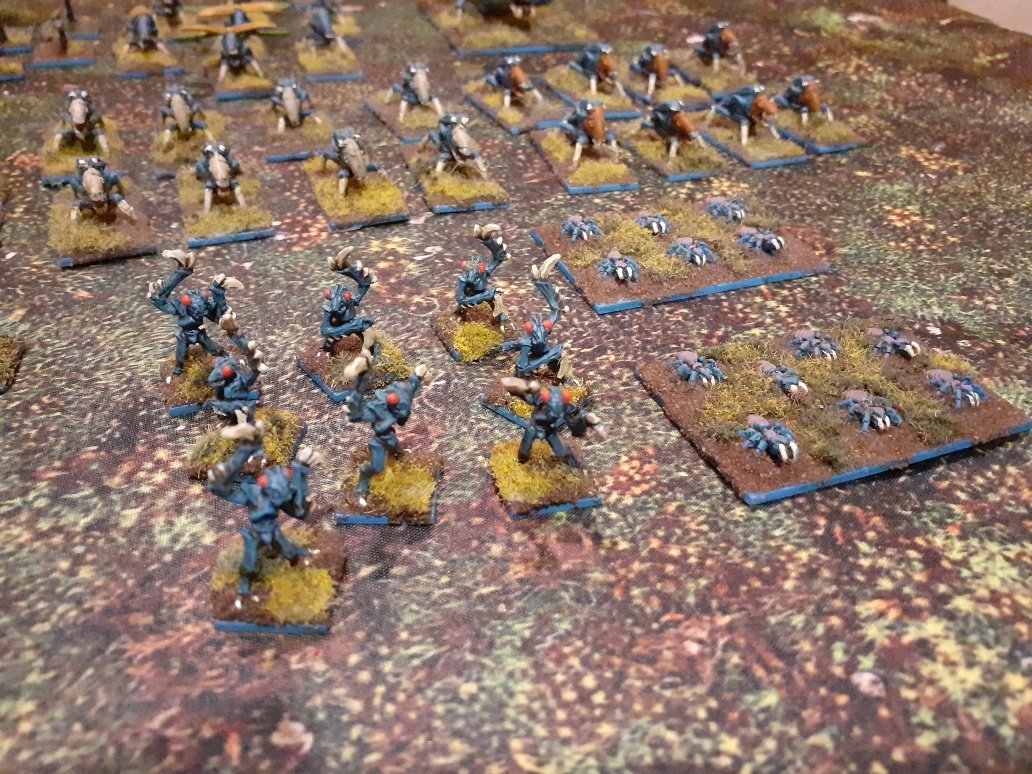 Stealhy Pioneer bugs are eyes and ears of the Swarm. They are not very hard-hitting bugs, but they scout role is a different comparing to other armies. They have Pheromone Markers rule which gives bonuses to all units attacking enemies within 18" from unit with this rule. Also this bonuses are cumulative from different units with Phereomone markets (up to 3)!

Pioneer bugs are smarter comparing to another types of units and do not have Animalistic behaviour rule. This line has the units from Tier 2 to Tier 5. 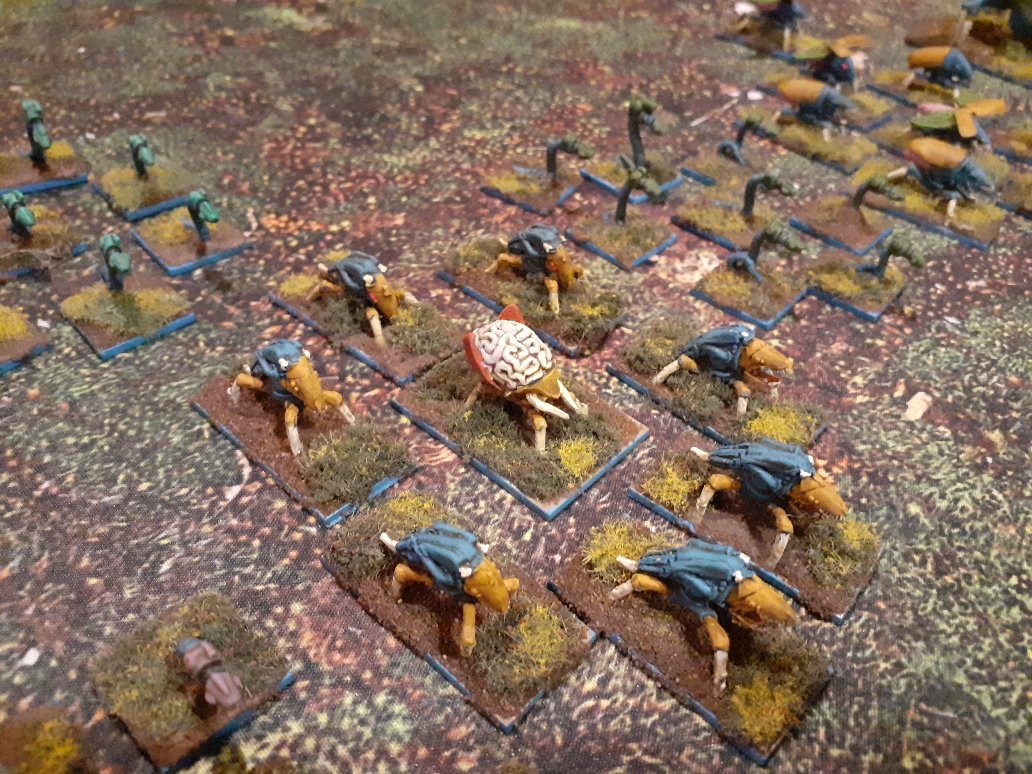 All swarm have to consists some brain-bugs! They are very useful support unit, allowing to better control other types of Bugs. They allows to automatically rally the nearby units and cause them to act smarter - they can suppress Agressive rule and allow the Bugs to use cover. Higher-tier bugs has also some interesting special rules, such like Psychic Wave or mentioned above Pheromone markers rule.Of course the line ends with huge and extreme dangerous Queen!

As the bonus there are Infected Humans unit (Tier III). In short: zombies anyone?

Space Bugs, like all other armies, has complete campaign rules. They are fully compatibile with Mercs, the only difference is in terminology (e.g. Doctrines are called Evolutionary Pathways, Battle Honours are called Adaptations etc.). All Adaptations, Evolutionaty Pathways and so on are unique for this army.

As you can see the Space Bugs is quite interesting army to play. You can try different tactical tricks and you are not limited to frontal assaults. Flanking, suppressing, selective destroying fragile elements of enemy battleline, using special attacks, hit-and-run tactics and much more are at disposal of the Hive Minds. Are you dare to lead you swarm to become dominant in the ecosystem?

Note: the models from the pictures come from my personal collection and are produced by various manufactures (Khurasan Miniatures, Rebel Minis, Oddział Ósmy). PMC 2670 do not have any official miniature line - simply use what you like!